Development : XML plugin 2.0 released
Posted By: softwarefailure. on 2022/12/5 17:09:36
Airsoft Softwair, the hardest working men in code business, are proud to announce the immediate availability of version 2.0 of the XML plugin for Hollywood. This plugin, previously known as XML Parser, was one of the first Hollywood plugins and has now received a major update with many new features.

The biggest new feature in version 2.0 of the Hollywood XML plugin is that you can now serialize Hollywood tables to XML documents with just a single function call. In the same way you can also deserialize XML documents to Hollywood tables with just a single function call. This is made possible by Hollywood 9's new serialization plugin interface which is why the XML plugin now requires at least Hollywood 9.0. Further new features include lots of new callbacks to handle advanced XML features like namespaces, entities, attlists, and more. Finally, the XML plugin now includes a comprehensive documentation that describes all features and contains many examples.

[b]This release was brought to you by Airsoft Softwair - the hardest working men in code business.
Read More... | 1 comment
Community : Amiga-News.de Advent Calendar
Posted By: Primax. on 2022/11/29 15:44:08
Amiga-News.de asked developers and programmers for a little anecdote for an advent calendar. So from December 1st until Christmas in sometimes shorter, sometimes longer texts you will read about their Amiga beginnings, first successes and experiences from their creative wealth and little incidents to smile or even to think about. And of course also one, maybe two ;) MorphOS developers are involved. A big thank you to all who participated!
Read More... | 9 comments
Software : Iris 1.5
Posted By: jacadcaps. on 2022/11/27 18:29:25
Iris 1.5 is now available for download from iris-morphos.com.

The new version introduces support for auto-archiving attachments into a zip archive, including encrypting them with password. It's also possible to unpack zip attachments directly from Iris.
Read More... | 3 comments
Software : Wayfarer 4.4 released
Posted By: jacadcaps. on 2022/11/27 18:29:16
The new version introduces massive performance gains in decoding of large file images. 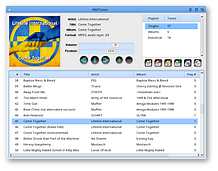 RNOTunes is a GUI based audio player application with support for many different audio formats, embedded cover images, and Last.fm scrobbling. A video demonstration of the program is available on YouTube.

Please visit its homepage for more information, screenshots, and download links.
Read More... | 5 comments
News Archives : Amiga Future issue 159 released
Posted By: AndreasM. on 2022/11/5 18:25:52
The English and German issue 159 (November/Dezember 2022) of our print magazine Amiga Future has been distributed today, and can also be ordered directly from our editorial office at Amiga Future, and from other Amiga dealers that stock it.

On November 4th 2002, Airsoft Softwair, the hardest working men in code business, released Hollywood 1.0 for 68k AmigaOS. Originally advertised as a multimedia authoring solution, nobody would have expected back then that this software would turn into a cross-platform programming language for lots of platforms with dozens of plugins for all kinds of tasks. Now, 20 years later, Hollywood is still going strong, receives regular updates and new plugins, and is used by many people around the globe. All of this would not have been possible without the continued support of many Hollywood enthusiasts in the past 20 years. Only the positive feedback we received right from the start made us continue developing Hollywood into what it is today.

As a little "thank you", we proudly present yet another plugin for Hollywood: XLSX. The XLSX plugin makes it possible to conveniently read and write XLSX documents from Hollywood scripts. It offers a wide variety of functions to set and get cell values, cell types, cell formulas, document/worksheet properties and several other attributes. It also offers an iterator function for a high performance iteration of a large number of cells.
Read More... | Comments?
MorphOS : openssl3.library - November Hotfix for MorphOS 3.17
Posted By: ASiegel. on 2022/11/1 16:07:35

New vulnerabilities have been identified and fixed for the version of OpenSSL that is included in MorphOS 3.17. Two discovered issues, namely CVE-2022-3786 and CVE-2022-3602, were found to potentially affect MorphOS users.

A fixed OpenSSL library will be bundled with a future MorphOS release. Meanwhile, you can install the following replacement openssl3.library that fixes the problem for MorphOS 3.17: Download

To install it, copy the file to MOSSYS:Libs and reboot.

wayfarer.icu
Read More... | 5 comments
Development : AVCodec plugin 1.5 released
Posted By: softwarefailure. on 2022/10/14 20:08:07
Airsoft Softwair, the hardest working men in code business, are proud to announce that version 1.5 of the AVCodec plugin for Hollywood has just been released. This plugin allows Hollywood scripts to load all kinds of video and audio formats supported by FFmpeg. Version 1.5 is a minor update which introduces support for parametric stereo and contains some fixes.